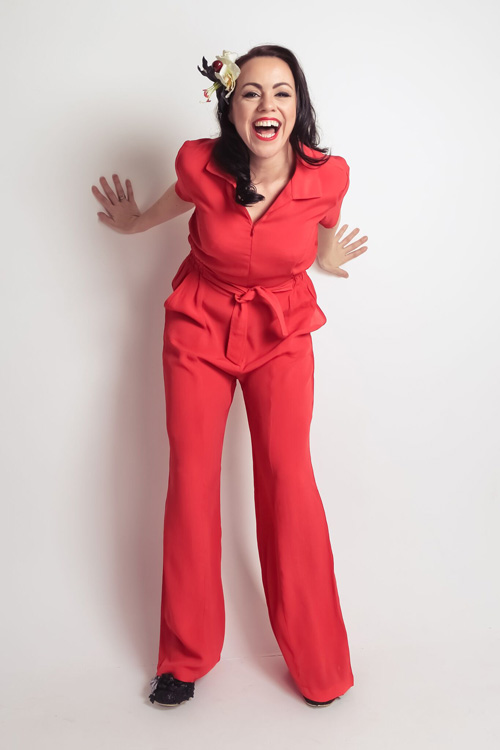 Sister Suzie hails from Northumberland’s wild and rural northern border, but has been bringing her natural down-home charm, undiluted, to southern climes of England for the last few years.

Her love of rockin’ music was kicked off when aunty Freda turned her on to Elvis at a young age. Suzie’s full-on attachment to the sounds from the other side of the tracks came from her meeting a certain Dale Robinson, a home town man who played her some sides by Rufus Thomas. This would lead to her enthusiastically seeking the records of Memphis Minnie, Big Mama Thornton, Little Walter, Jimmy Reed, Robert Johnson, Rufus Thomas, Leadbelly and Elmore James. Quickly her biggest idol became New Orleans Soul Queen, Irma Thomas. This may have had more than a little to do with Suzie packing her bags and travelling to the Crescent City – where she has returned more than once since – and blowing her life savings. One thing Suzie has little of is regrets!

So, an itinerant life working to pay for her music habit led her around the UK for a while until settling in the south in 2016 when she funded her own recording session to cut a few trial tracks with drummer Brian Nevill, bass player/producer Mick Wigfall and Matt Jackson on guitar.

Fired up by the results, Suzie, Matt and Brian were all on board for the idea of a live group and were very quickly joined by Eddie Edwards on double bass. This trio of players formed the hard core of the Right Band for gigs with Suzie, augmented by any one of a hand-picked gang of tenor sax players from the UK’s finest which have included Mick Paice, Nick Lunt, Aaron Liddard and Al Nicholls – the man who put the whammy in the album.

Inspired by audience reaction at gigs, some new recording dates in 2017 and 2018 resulted in twelve hot album tracks being cut that perfectly captured the essence of the live shows. These include a handful of originals by Suzie and Matt including the title track “Ain’t No Lady” - a raw boogie-woogie piano piece featuring Big John Carter at the keys with Suzie belting in the style of Bessie Smith, created live right there in the studio.

The album is scheduled for release on 31st August 2018.

5 Nights, 1 Stage, a Residency at Glastonbury