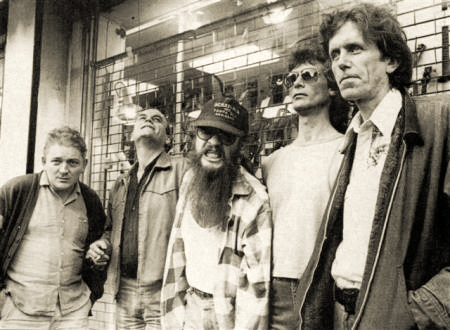 With Geraint Watkins and company in full flight, nobody came close to matching the Alligators in their heyday during the early 1980s…and then of course…they broke up.

Jim Driver got it dead right in 1996 when he obliged with writing the album notes for “Gateway To The South” for the inaugural Proper Records release (PRPCD1) after they had re-formed (as opposed to reformed) with a new rhythm section and were back on the road.

He wrote “…since getting back together, the Balham Alligators have been kickin’ ass in clubs, concert halls and at festivals all over Europe. Gateway to the South is a spicy gumbo of rock ‘n’ roll, swamp pop, Cajun, zydeco and New Orleans style boogie-woogie that’s served up with more energy and excitement than the Pistols could manage after a fortnight in Columbia. Theirs is a rockin’ roots-music that’s out to party – that doesn’t give a damn about tomorrow’s hangover and vibrates with more good-time energy than is safe to be consumed by 9-5ers not in possession of a valid doctor’s note.”
‍

So, they did gigs, festivals and a few overseas trips to the delight of many - outclassing and outdrinking any opposition along the way…and then of course…they broke up.
‍

Sadly, nobody is ever again going to be stuck to the floor in a sweaty old boozer jammed up against fellow revellers sloshing beer all over the place and raving the night away to this unique bunch of hell-raisers. Instead, you’ll have to jam those earphones in tight, crank up the level and grin from ear to ear for a couple of hours enjoying the delights of their entire recorded output being available for the first time in digital format.
‍

Repeat as necessary and the good times will always be rolling.