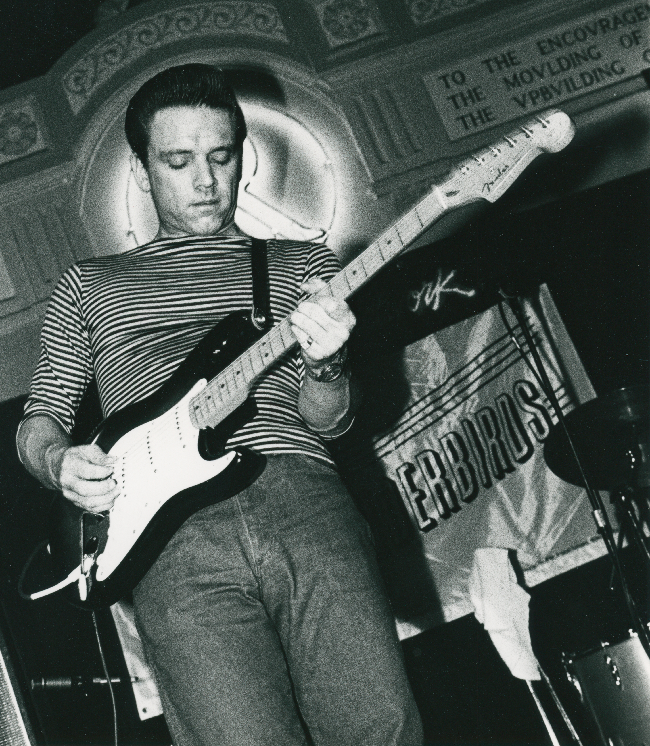 The blues.  Two words that have been expressed in music for over a century.

Do you get the blues?  Of course you do.  And if you’re reading this it’s because you already know that listening to it at its best is a sure-fire cure for it.  When you hear the real thing for the first time, you start digging deeper and you find the same feeling in all other varieties of music.  The kind performed by people possessed of a strange force, uniquely playing their instruments and telling stories of lives largely ignored by historians and sociologists.

By the time Jimmie Vaughan was a young boy in the 1950s, the dreary demands of the mainstream had already diluted American music, but there was a rich vein of the real thing lurking just beneath the surface.  You just needed good navigation to find it and aged five, Jimmie had that in spades from uncles on both sides of his family who played Merle Travis, Jimmie Rodgers and stuff like that on guitars around the Vaughan home.  Then there were the occasional shining lights to be found on TV, in the inspirational form of the likes of Bob Wills and Jerry Lee Lewis.  And so, he was already receiving the signals from all sides and just one step from the blues when he discovered KNOK – a black radio station in Dallas - and there was BB King, Jimmy Reed and all.  Large as life.

Late in 2017 I started talking to him about finding a way of producing a box set at some time that would crystalize his career to date.  He was very keen to have his story told in his own words at the heart of it, but the difficulty was finding a suitable point in time to put down the pen and get the project into production.  We settled on September 2021 as a release date to mark his seventieth birthday, and then in March 2020 the world ground to a halt anyway.

But the work was done and here we are with The Jimmie Vaughan Story.  It’s a six-hour music ride with a fully illustrated book which follows his road from those early awakenings through to his Grammy nominated album “Baby, Please Come Home”.

And what a ride it is.

Soon after he first picked up a guitar, he was learning Jimmy Reed, John Lee Hooker and Chuck Berry songs and joined his first band The Pendulums.  A couple of years and two bands later he was in Paul Ray’s band opening for Junior Walker and the All-Stars at the Whisky a Go-Go in Los Angeles and touring California with Doug Sahm’s band.

Returning to Texas, he decided on settling in Austin and was one of a handful of pioneers flying the blues flag when he started his Blue Monday nights at the One Knite on Red River with Lewis Cowdrey, Paul Ray, and Doyle Bramhall – known as The Storm.  And in case you’re wondering…YES…there are three knock-out previously unreleased live recordings by the band in the box set.  Later, they also played Alexander’s on Saturday nights and that’s where Keith Ferguson joined on bass and a guy named Kim Wilson looked in one night to see what’s shakin’.  Before you knew it…Ladies and gentlemen…The Fabulous Thunderbirds.  Then in 1974, Clifford Antone started his club, and the T-birds became the “house” band for visiting acts like Jimmy Reed, Eddie Taylor, Luther Tucker, Hubert Sumlin, Jimmy Rogers and many more.  Looking at the pictures in the book and reading the cast of characters he played with in those early days it’s no surprise that Jimmie refers to those early years as “…like going to Blues College”. (Even though somehow, he forgot to mention that as a young teenager his band opened a show for The Jimi Hendrix Experience in Dallas.)

But it’s a sign of how things were in those days that a group as good as The Fabulous Thunderbirds – who were almost the only game in blues town – could not easily get a record deal.  But it came eventually and thankfully, in addition to the best of their studio recordings, we have been able to include several previously unreleased T-birds recordings in this box set.

Since turning solo, in the early 90s, Jimmie started singing and has developed a style that allows him to perform his own material and a variety of other songs just the way he wants to.  He’s certainly earned the right to do that.  Since he was a teenager, Vaughan has dedicated his life to reminding folks what American music is all about from the stage and on record…and there’s no categories in his book.  “When I talk about country and blues, they're the same thing," he says.  "Muddy Waters and Hank Williams, Webb Pierce and Jimmy Reed.  When I was a kid, I didn't understand the difference.  Everybody was always asking me, 'Why do you want to play blues?  Why don't you play country?'  But I would listen to the country guys and they would be doing a Jimmy Reed song.  They're playing the same lick.  And Ray Charles, Little Milton, Guitar Junior, Lonnie Brooks, B.B. King-they all did country songs.  Is Bob Wills country, blues or jazz?  And the answer is, it's American music.  And if you don't like it, kiss my ass!  I'm tired of trying to pigeonhole everything.  I want to bring it together; it comes from the same place."

Fellow Texan Sam “Lightnin’” Hopkins learned from Blind Lemon Jefferson and paved the way for the transformation of the folk blues of the 1930s into its electric form.  Jimmie has added a stretch or two of his own to that lengthening highway and continues to do so.  Here in 2021, his story is still being written with new tour dates announced and a new album taking shape for release further on down that very road.

So, grab the chance own one a copy of this limited-edition box set and get the inside track on his life so far.  Guaranteed, there is never going to be a reprint of THE JIMMIE VAUGHAN STORY and it’s not available digitally.