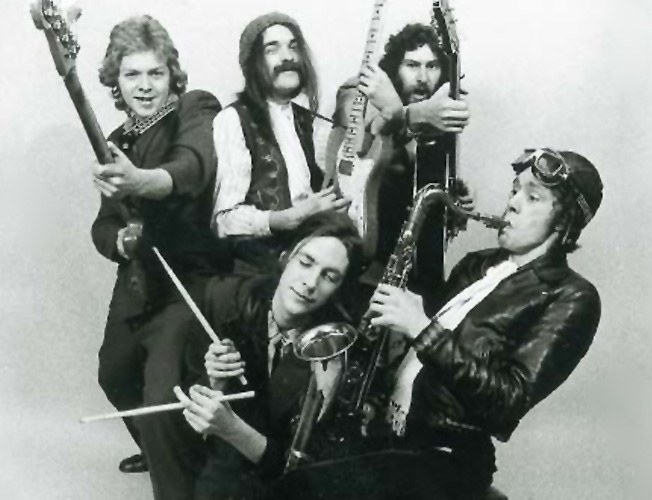 Chilli Willi and the Red Hot Peppers were one of
the main British pub rock groups of the early 1970s.  Later managed by Jake Riviera, who first
worked for the band as a roadie, they reached their peak as part of the "Naughty
Rhythms Tour" of 1975, along with other stalwarts of the same
scene, Dr. Feelgood and Kokomo, each band alternately headlining
on different dates.

The band had its origins in
a folk-rock duo formed by ex-Junior's Blues Band
members Martin Stone and Philip C. Lithman.  Lithman moved to San Francisco in
the late 1960s, leaving Stone to play with Savoy
Brown and Mighty Baby.  The duo
reunited in the early 1970s, recording Kings of the Robot Rhythm with
vocalist Jo Ann Kelly and various members of Brinsley Schwarz.
The album was released in 1972; the same year, the duo expanded, adding Paul
"Dice Man" Bailey, Paul "Bassman" Riley, and Pete
Thomas to the line-up.

During the next two years, Chilli Willi & The Red Hot
Peppers became a popular live act in Britain, and
recorded two John Peel Sessions for BBC Radio 1, on 9 April 1973
and 25 July 1974.  In 1974, they released
their final album, Bongos Over Balham, which sold poorly; the band split
in 1975.

After the band's breakup, Lithman
moved back to San Francisco where he began to work with his former
associates, The Residents, under the name Snakefinger.  He died in 1987. Stone (formerly of Mighty
Baby and The Action), went on to play with the Pink Fairies among
others before moving to Paris and concentrating on his book business until his
death in 2016.  Pete Thomas became the
drummer for Elvis Costello's  band –
The Attractions, Paul Riley played with Graham Parker and Paul Bailey
formed Bontemps Roulez.